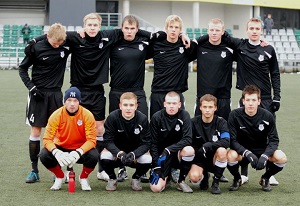 Football club FC Valga Warrior is established in 1990. In its best days Valga was playing in the Estonian Premier League (highest level) and the last season was in 2006 there. Club achievements – a lot of youth club players have reached to the Estonian Championship or to the First Division football clubs. Some players play for Estonian Youth National teams, too. Now FC Valga Warrior is playing in Estonian Championship III league.